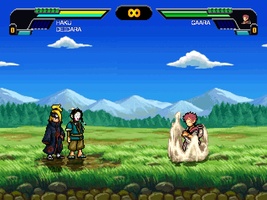 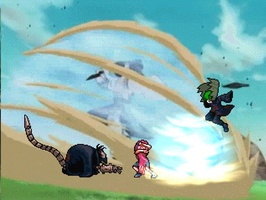 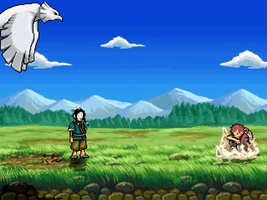 Advertisement
Naruto Mugen is a 2D fighting game in which you can use almost all of the anime and manga characters from Naruto. All of this happens in one-on-one fights or in simultaneous two-on-two fights.

You will have more than fifty characters at your fingertips including different types of Naruto that correspond to different points in the series as well as, of course, the rest of the main characters from the manga, which did not get left behind.

Each of these characters has its own skills, some of which are really incredible. Characters like Deidara can create giant versions of themselves so that they can stand in for the original character for most of the fight.

Naruto Mugen is one of the most powerful of the existing 2D Naruto fighting games that were developed with the MUGEN engine. It’s a true gift for fans of the series.
Reviewed by Álvaro Toledo
Advertisement

what windows is it for?

after downloading how to install the pc

make this a torrent so the download won't stop due to the huge file size pls.

It may interest you

Tekken Tag Tournament
The PlayStation 2 classic, now on your PC thanks to MAME
GTA IV: San Andreas
San Andreas is back to life in GTA IV
PUBG Lite
The version version of PUBG for PC
Valorant
Spectacular tactical team shooter
Call of Duty 2
Play 2nd World War as if you really were there
Creative Destruction
A free Fortnite-style battle royale that won't disappoint you
Total Overdose
Tequila-fuelled rampage
Knives Out
Online action for up to 100 players